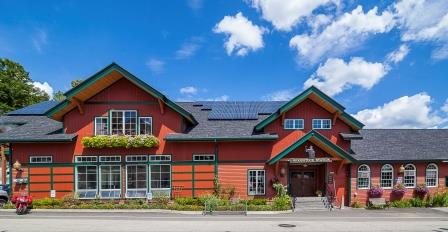 North Woodstock, NH – After over 30 years in business, the Woodstock Station and Brewery enjoyed record business levels during the summer and fall of 2014. Just over one year ago, owner Scott Rice completed a major expansion that included bringing their retail brewing and bottling line in-house, and adding seating capacity to the restaurant and bars.

The brewery and restaurant have enjoyed consistent success through the years and have grown into a destination for tourists during all four seasons. At peak times, the restaurant had become unable to accommodate demand, as well as lacking the ability to host larger functions. The beer produced for retail sales had been traditionally brewed and bottled by Shipyard Brewing in Portland, ME resulting in increased costs.

“The potential was clearly there for increased business levels and revenue. We had to create a financing solution that would allow for a unique, multi-faceted expansion” stated NCIC Business Resource Manager, Dave Keenan.”

“Throughout the process we encountered various hurdles which NCIC gave us guidance on, allowing us to continue on schedule,” stated Woodstock Station Owner, Scott Rice. “NCIC was able to help provide a lending solution that enabled us to move forward. We added 25 new full time jobs. The result is by far our busiest summer in history,” said Rice.

The restaurant and brewery are now able to host large functions such as wedding receptions and private parties, as well as brew and bottle all beer on premise.